January was an ugly start to the year for the capital markets with the S&P 500 index declining more than 11% at its worst point before recovering to a loss of 5% for the month. While there were ancillary concerns such as corporate earnings, inflation, and geopolitical risks (e.g., Russia / Ukraine), it seemed as though the path of monetary policy was the primary force that drove markets lower. Central banks globally have begun the process of paring back their ultra-accommodative monetary policies that were enacted to combat the negative impact on their economies that resulted from the global pandemic. Our central bank, the US Federal Reserve, communicated in January their intention to follow suit by likely raising base lending rates to 0.75%-1.00% in 2022 as well as to end their systematic program of purchasing fixed income securities that helped to provide stability and liquidity to fixed income markets and artificially depress long-term interest rates. Additionally, it was implied that the US Federal Reserve could begin to reduce its holdings of fixed income securities sooner than expected, potentially later this year.

What does this all mean for the economy and investors?

The Ark Innovation Fund (ARKK) rose to prominence in 2020 after the fund’s timely positioning in investments like Tesla resulted in outsized gains. Unfortunately, most of the fund’s investors never participated in those gains, as nearly $100 billion entered the fund in late 2020 and early 2021, just before performance peaked.[2]

The research that follows seeks to outline exactly why we remain optimistic for economic growth in 2022, and why it could be an exciting year to invest. Thank you for your continued confidence in our management of your wealth. 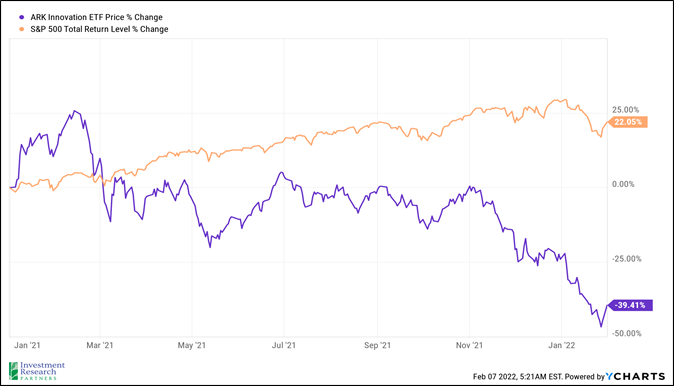 The Risk-Taking Score (RTS) should be utilized relative to your long-term strategic asset allocation selected by you and your financial advisor. The RTS is meant to be illustrative of our Investment Committee’s view toward the overall investing environment in the short-to-intermediate term (0-3 years) and how your portfolio should be positioned accordingly relative to your long-term strategic allocation.

US economic growth remains in an upward trajectory. Inflation and supply chain-related issues continue to receive media attention, but these issues are largely driven by very robust demand for goods and services. Much of this demand is being driven by households which, on average, are in the best financial position in decades as a result of fiscal stimulus and low interest rates. Labor markets have been improving rapidly, with the unemployment rate dropping to 4.0% in January as 467,000 net new jobs were added. US manufacturing new orders are robust, and we have not yet seen evidence of a concerning build-up in inventories that has predicated past recessions. However, the sharp rise in inflation which began in summer 2021 coincided with a swift reversal of household sentiment as those surveyed responded with concerns that higher prices would erode their standard of living. We expect the rate of inflation to peak and trend toward more normal levels in 2022 as the pandemic recedes, fiscal and monetary stimulus are pared back, and energy prices stabilize.

As of February 4, 56% of S&P 500 companies had reported Q4 2021 results. More than three-quarters of those companies outperformed analysts’ consensus expectations for revenue and profit, though increasingly companies like Netflix and Peloton have mentioned slowing expectations in the quarters ahead, and firms like Goldman Sachs have cited significant increases in their compensation costs. All of which have contributed to increased market volatility in January. 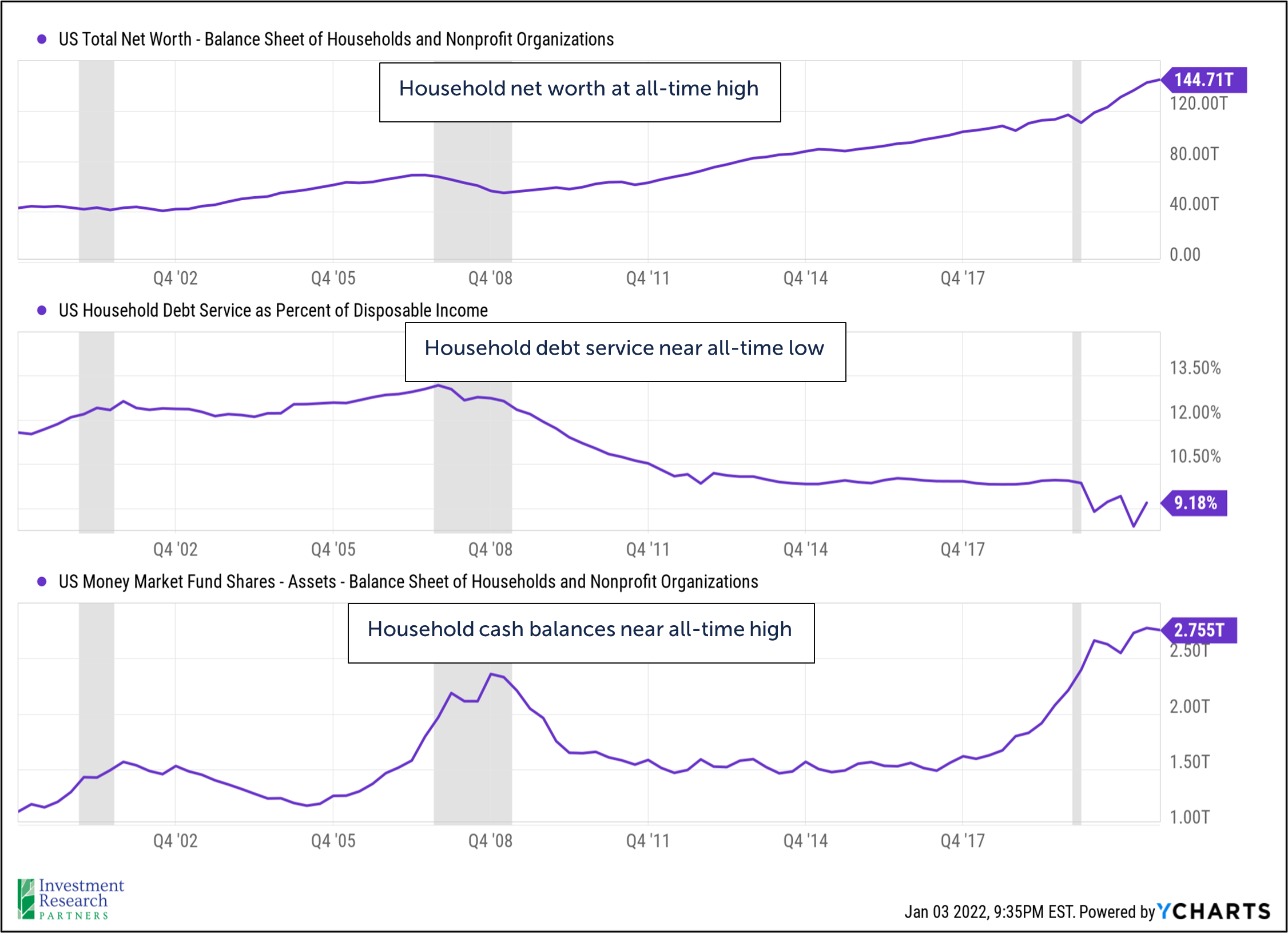 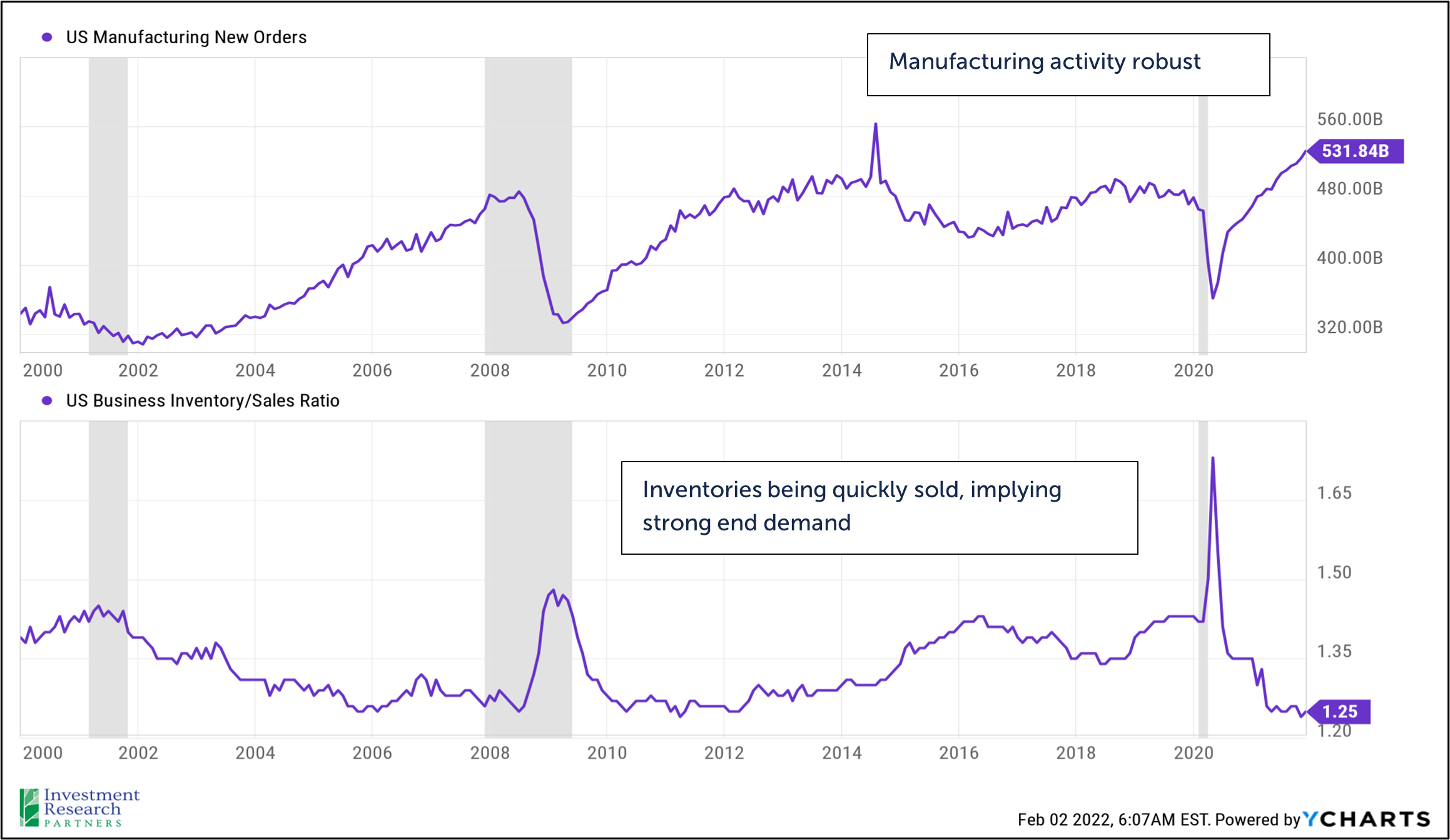 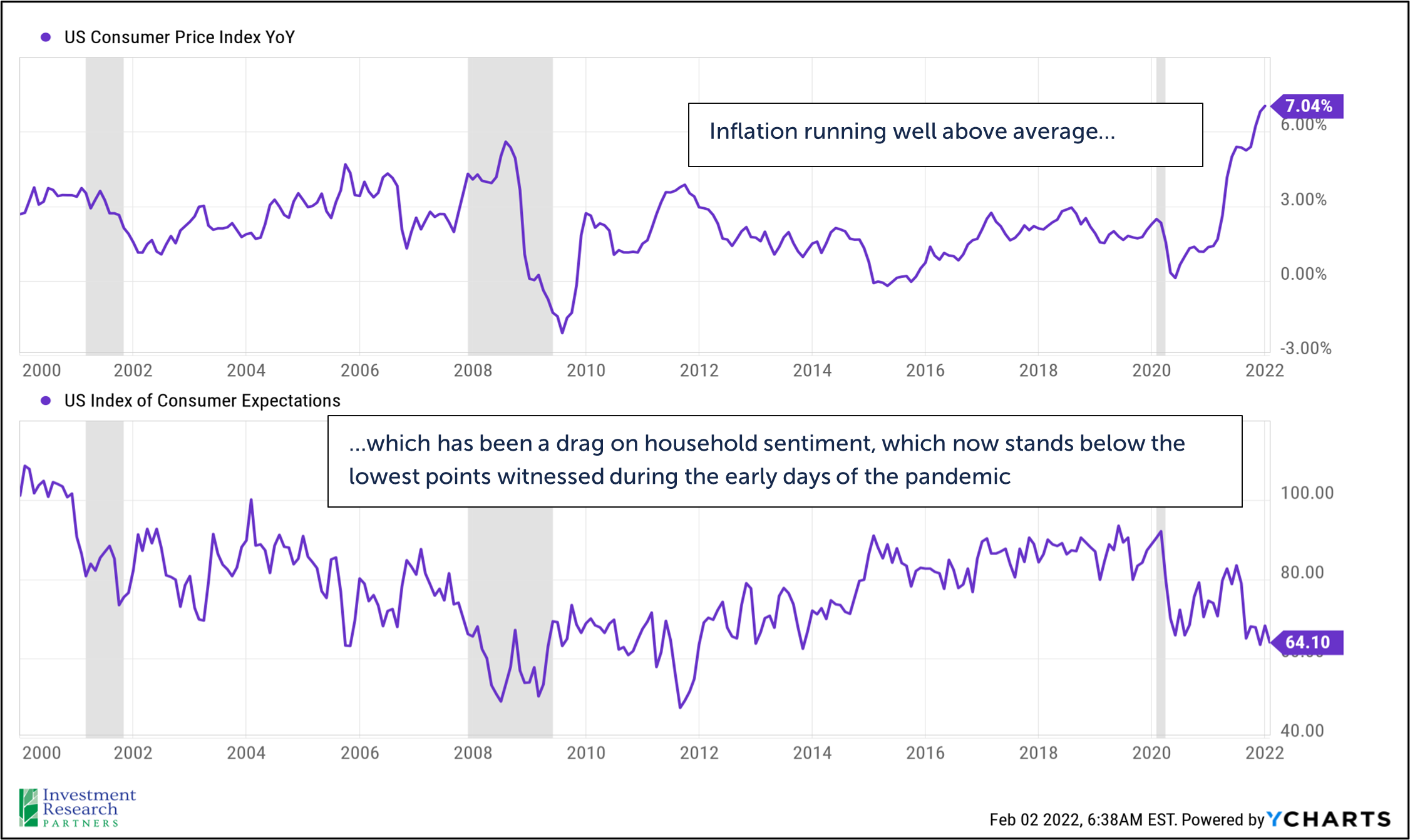 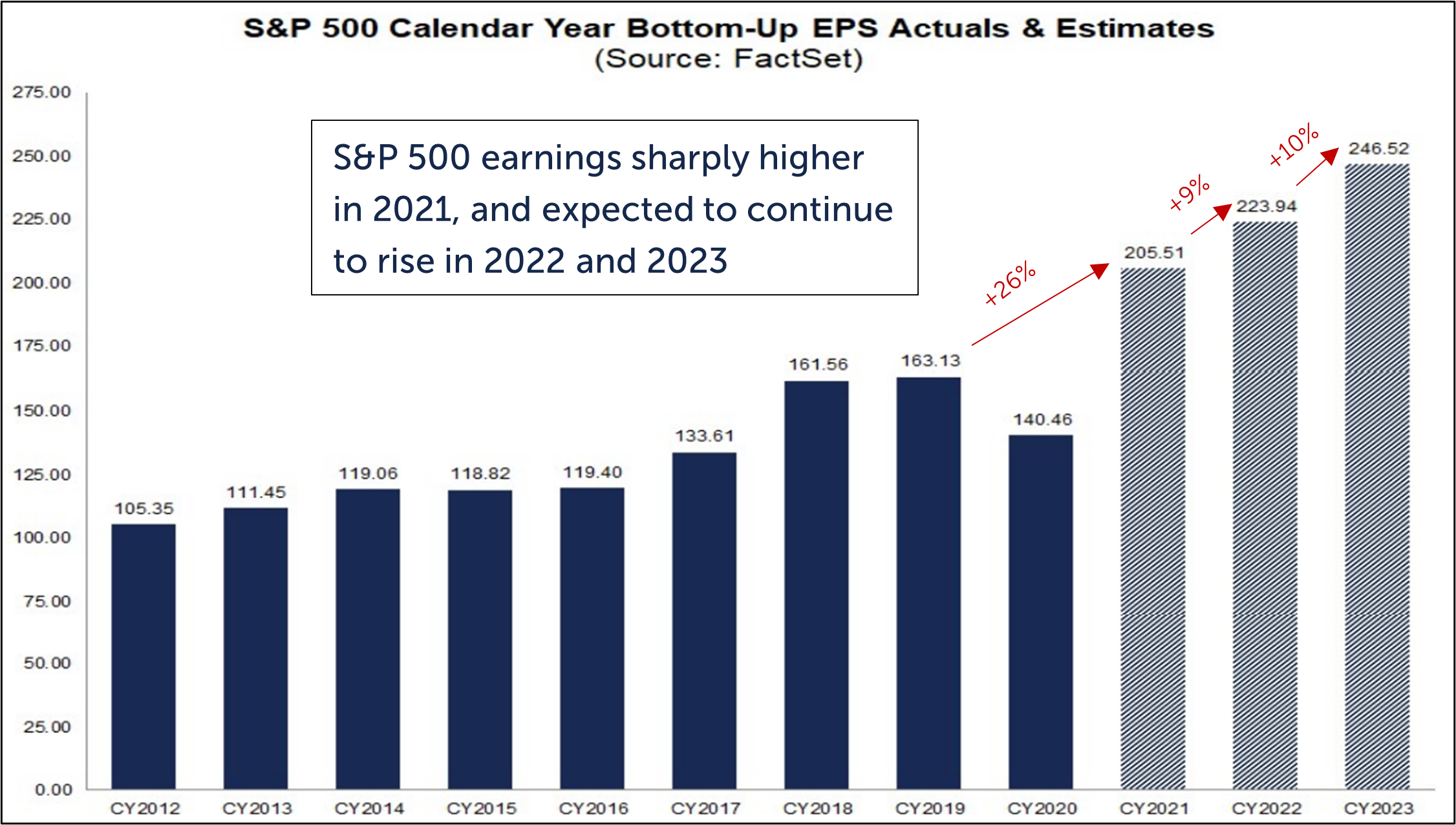 When assessing stock market valuation, investors often first look to the S&P 500 index as a gauge. The combination of earnings growth and share price declines in January have served to push the index’s price-to-earnings ratio down toward a more historically normal range. In last month’s letter, we highlighted the significant concentration of the S&P 500’s top holdings in large cap growth stocks, which saw outsized declines in January. This led to the S&P 500 underperforming an equally-weighted index during the month. 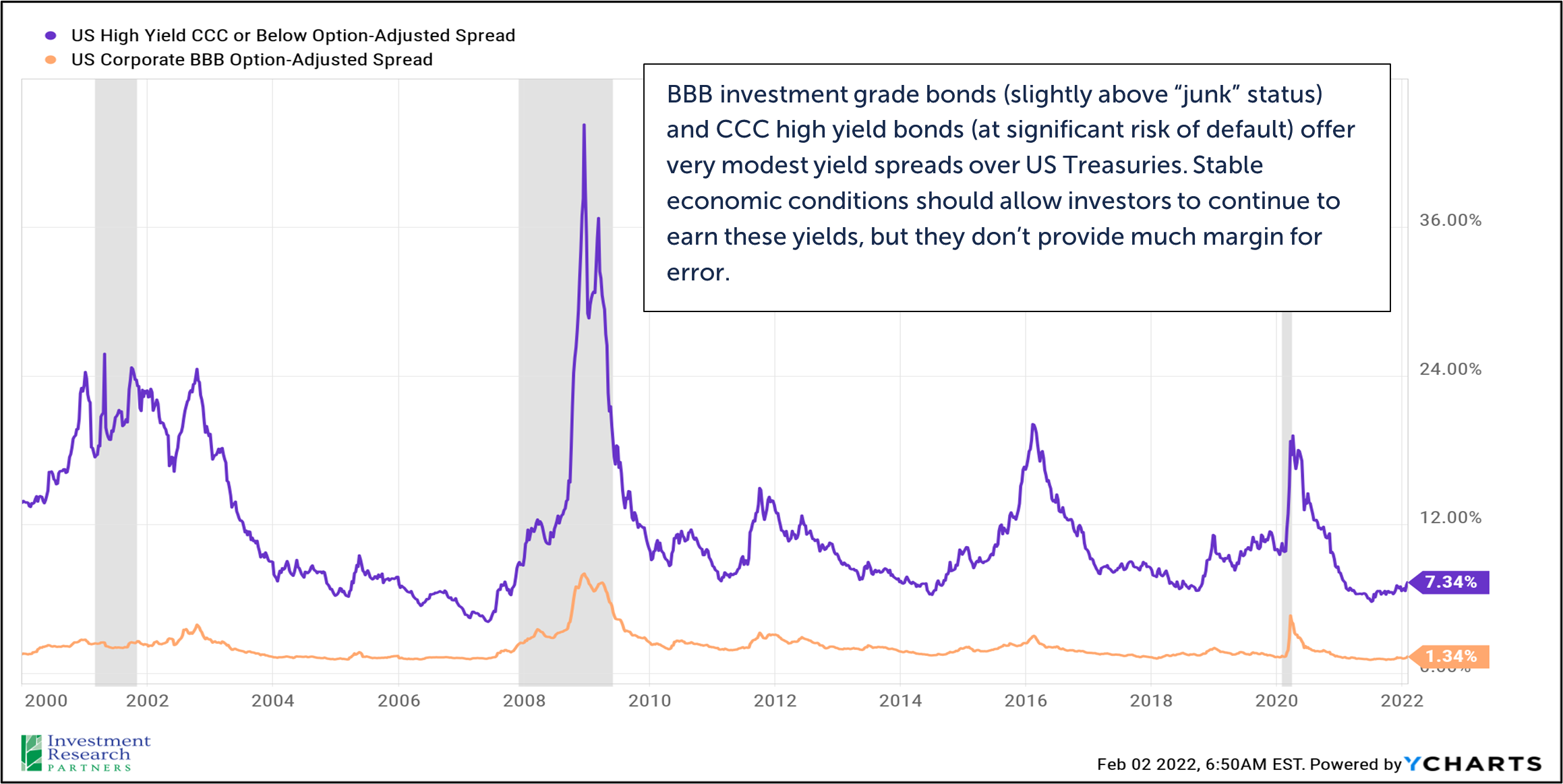 Our technical analysis of markets involves multiple tools that seek to identify buy / sell signals and trends across various asset classes and securities. In January, many parts of the market that had been in strong upward trends for nearly two years, such as technology stocks, broke down. We are now looking for signs of a “bottoming process”, which simply means that selling is no longer overwhelming buying of a particular asset or asset class, and a new uptrend may be emerging.

Since 1987, The American Association of Individual Investors (AAII) has been asking its members the same question every week: “What direction will the stock market be in the next six months?” The results are compiled into bulls, neutral, and bears. The bearish responses rose sharply in January. Interestingly, when the survey has shown extreme imbalances (both extreme bearishness and extreme bullishness), this has historically often indicated a contrarian signal. Today’s extreme bearishness among survey members may be presenting a contrarian buying signal.

There are two primary considerations influencing our portfolio management approach going into 2022:

The Federal Reserve has begun communicating a path toward normalizing monetary policy (blue dots below), but market expectations for that path are meaningfully different (green dots). The Fed hopes to increase interest rates in a linear fashion over the next 2-3 years, while market prices imply that investors expect a much swifter normalization of monetary policy followed by a multi-year pause, potentially driven by expectations for a future (Fed induced?) recession. The swifter expectations for interest rate increases imply that market participations, on average, believe that the Fed is “behind the curve” with respect to inflation, and will be forced to normalize policy faster than desired in order to tamp it down. This dynamic, while it may appear subtle in the chart below, is likely a significant contributor to the stock market declines in January, particularly for growth stocks. We believe that inflation will moderate in 2022 as pandemic imbalances ease, fiscal stimulus is no longer a factor, and energy prices stabilize. This will give the Fed cover to raise interest rates along their desired path and should alleviate pressure on markets and interest rate sensitive investments.

The dispersion between the highest and lowest priced stocks in the market is at levels not seen since the dot.com bubble around the year 2000. We have been increasing shifting toward active managers and lower priced parts of the market that are expected to have a better opportunity to outperform the broad market going forward.