Rising costs have been a reality for much of 2021, though we anticipate the pace of increases to moderate in 2022 as energy prices and supply chain disruptions stabilize. Household and business spending are also expected to exhibit more historically normal patterns this year as fiscal and monetary stimulus are reduced (an acknowledgement that the economic recovery is well on-track).

On January 12, 2021, the Bureau of Labor Statistics published the most recent data for the Consumer Price Index (CPI) and its underlying components. This is the most commonly cited measure of inflation (rising costs) as it seeks to measure the average change in the cost of living for the average household in the average part of the country. Of course, no household is truly “average”, so the CPI is unlikely to be the actual experience of anyone given that we all spend differently. For example, a two-income household with young children who commute to work may be more impacted by the cost of gasoline and childcare, while a retiree on a fixed income may have his or her standard of living most affected by the costs of medical care and food. Additionally, rising costs tend to have a greater impact on lower income households given that a larger portion of their income goes directly to spending versus saving. Nevertheless, our government attempts to measure this average cost increase each month using the categories and weightings shown in the chart below (note: CPI is re-weighted annually, so the chart represents the most recent re-weighting at the end of 2020).

The CPI report this week showed that the index advanced 7% over the last year as of December 2021 after having risen 6.8% and 5.4% for the years ending in November and October, respectively.[1] Given that the annual increases in inflation have been running above longer-term averages for the past 8 months and steadily climbing, it would not be surprising to see increased market volatility as a result, particularly in more interest-rate sensitive parts of the market such as fixed income and certain parts of the equity market. The initial headline from the Associated Press read, “US consumer prices soared 7% in past year, most since 1982”, which certainly sounds alarming on the surface. We are tracking the impact of inflation across three separate (but related) fronts: 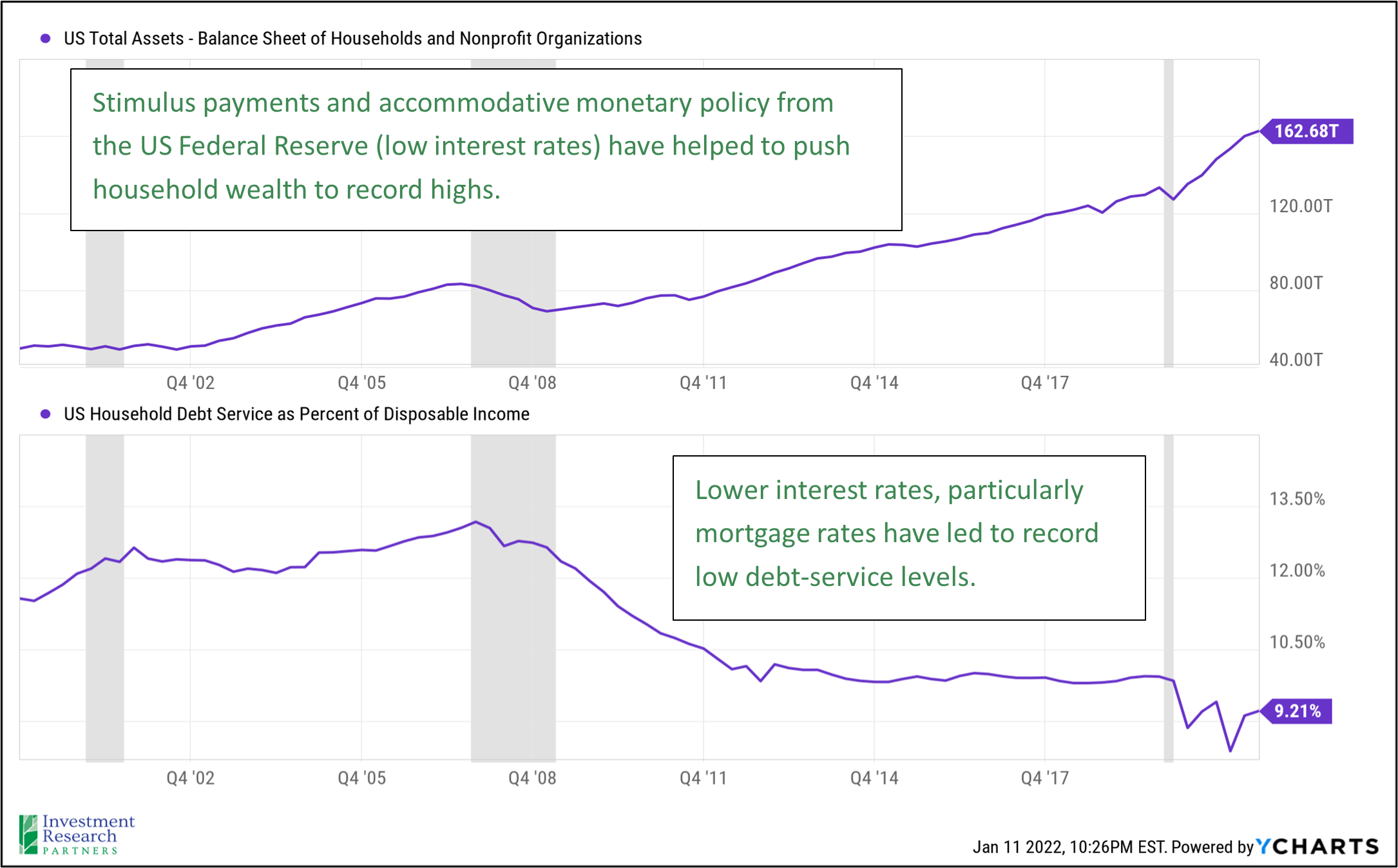 The chart below highlights the year-over-year growth in inflation and employment cost (a proxy for wage growth in the US) for the past 10 years ending December 31, 2021. For much of the recovery following the 2008 global financial crisis, wage growth and inflation were both anemic but relatively balanced when viewed at the aggregate level. 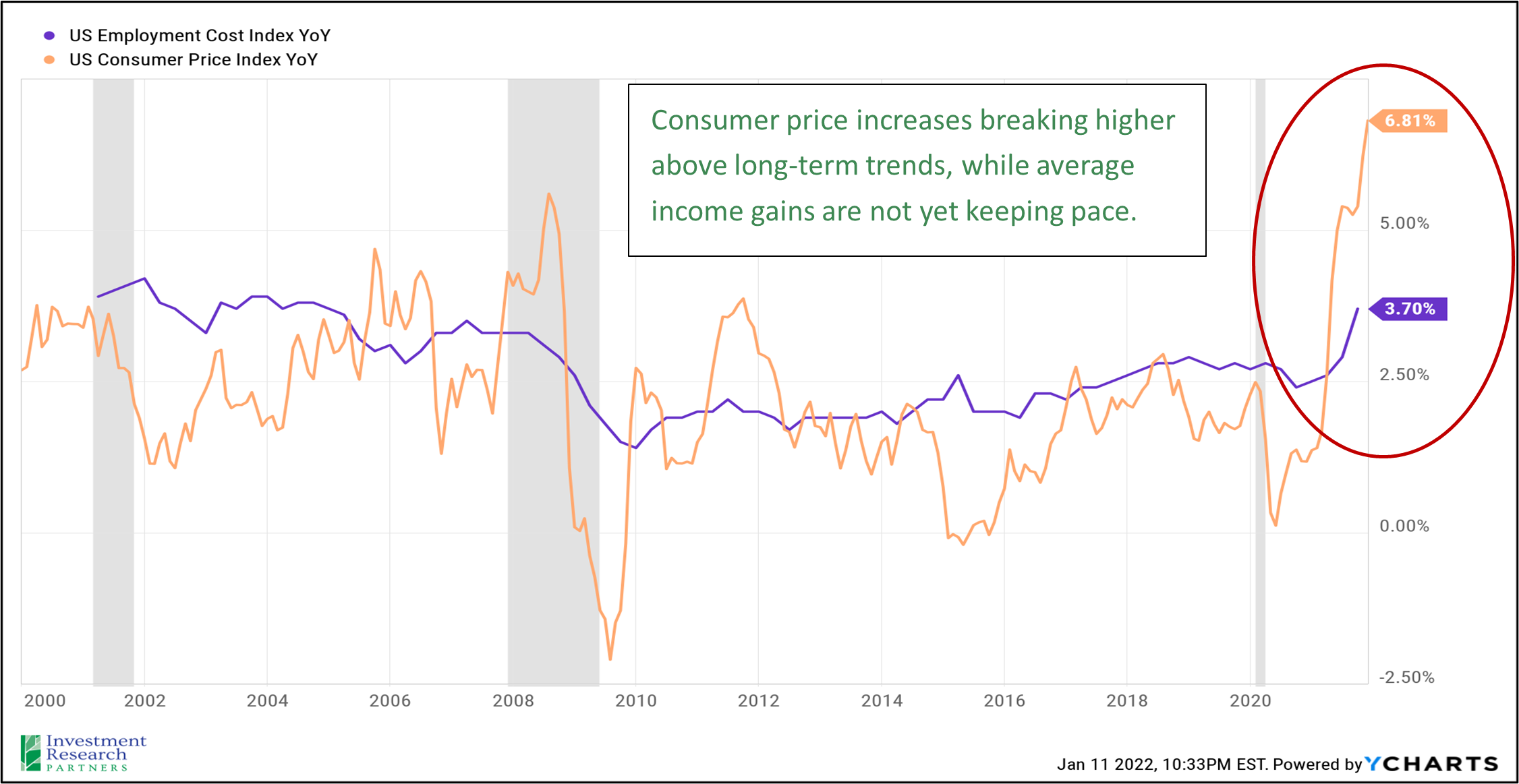 In the last year, wages have risen at a greater rate than the long-term average, but inflation has risen faster. This relationship has already begun to impact household optimism. When surveyed, households have expressed concerns that rising costs will impact their standard of living, and this has been the primary factor influencing household sentiment lower (briefly lower than the worst reading in the months immediately following the onset of the COVID-19 pandemic). 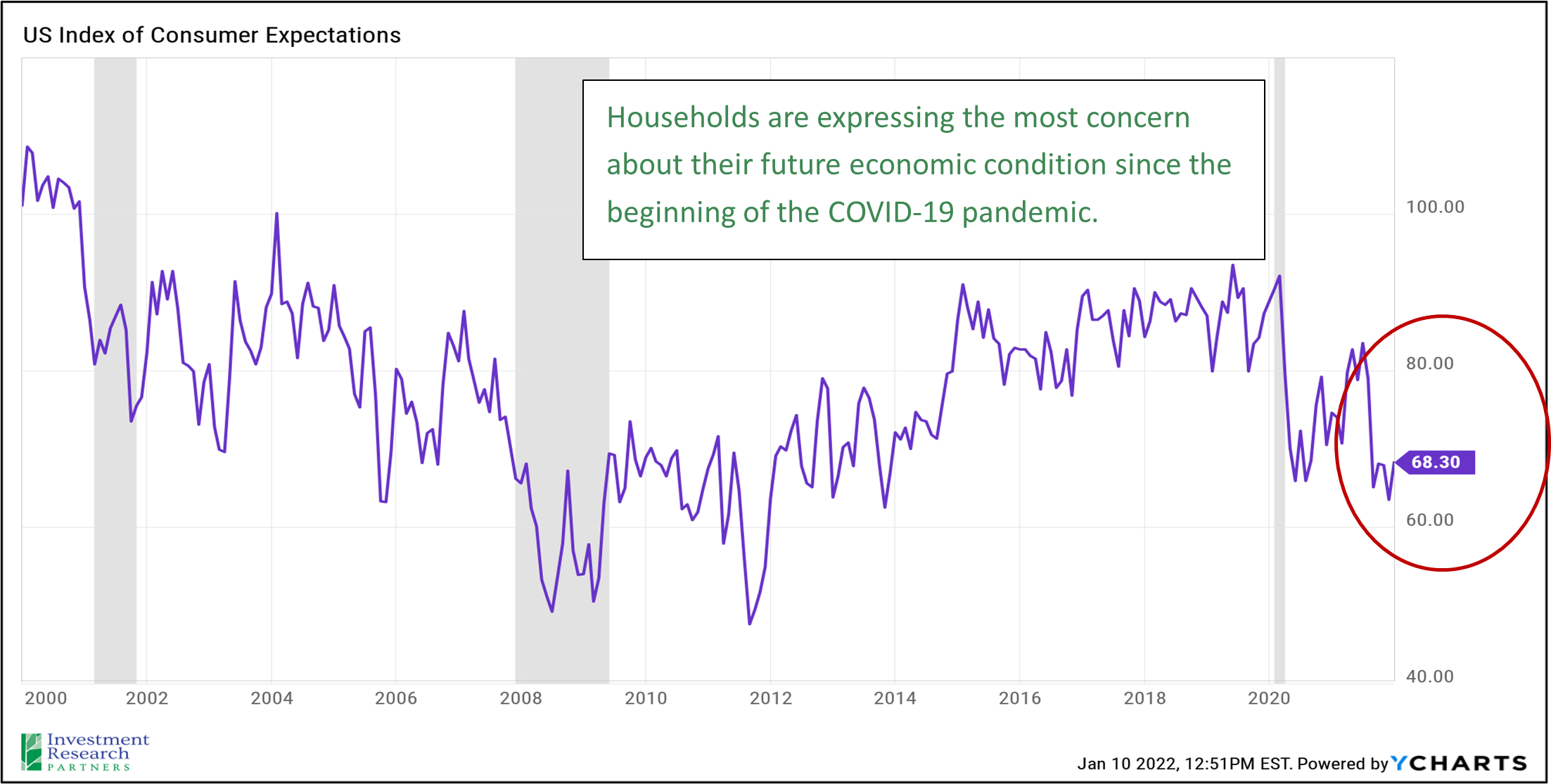 When we break down the underlying components of inflation, we believe that a large portion of the increase that occurred in the CPI over the last year can be attributed to the increase in energy. Energy does not have its own specific category in the CPI, but it has direct sub-categories under Housing and Transportation in the form of home fuels & utilities and motor fuels, respectively. At the end of 2020, the weight of these sub-categories in the index calculation was approximately 7%.

The chart below highlights the volatile nature of energy relative to CPI in aggregate. Energy advanced 33% over the year ending November 2021, which implies that the contribution of these subcomponents was approximately 2.5% of the 6.8% year-over-year increase in CPI (7% index weight multiplied by 33% increase in energy costs). In addition to these dedicated sub-components in the CPI, energy touches many other areas of the economy with respect to the production and transportation of goods and services which is not directly counted in the CPI calculation. For example, much of the change in cost for the food or apparel categories which represent another 18% of the index may be attributable to higher costs to create and distribute products (e.g., fuel for farm equipment, trucks, trains, ships, etc). 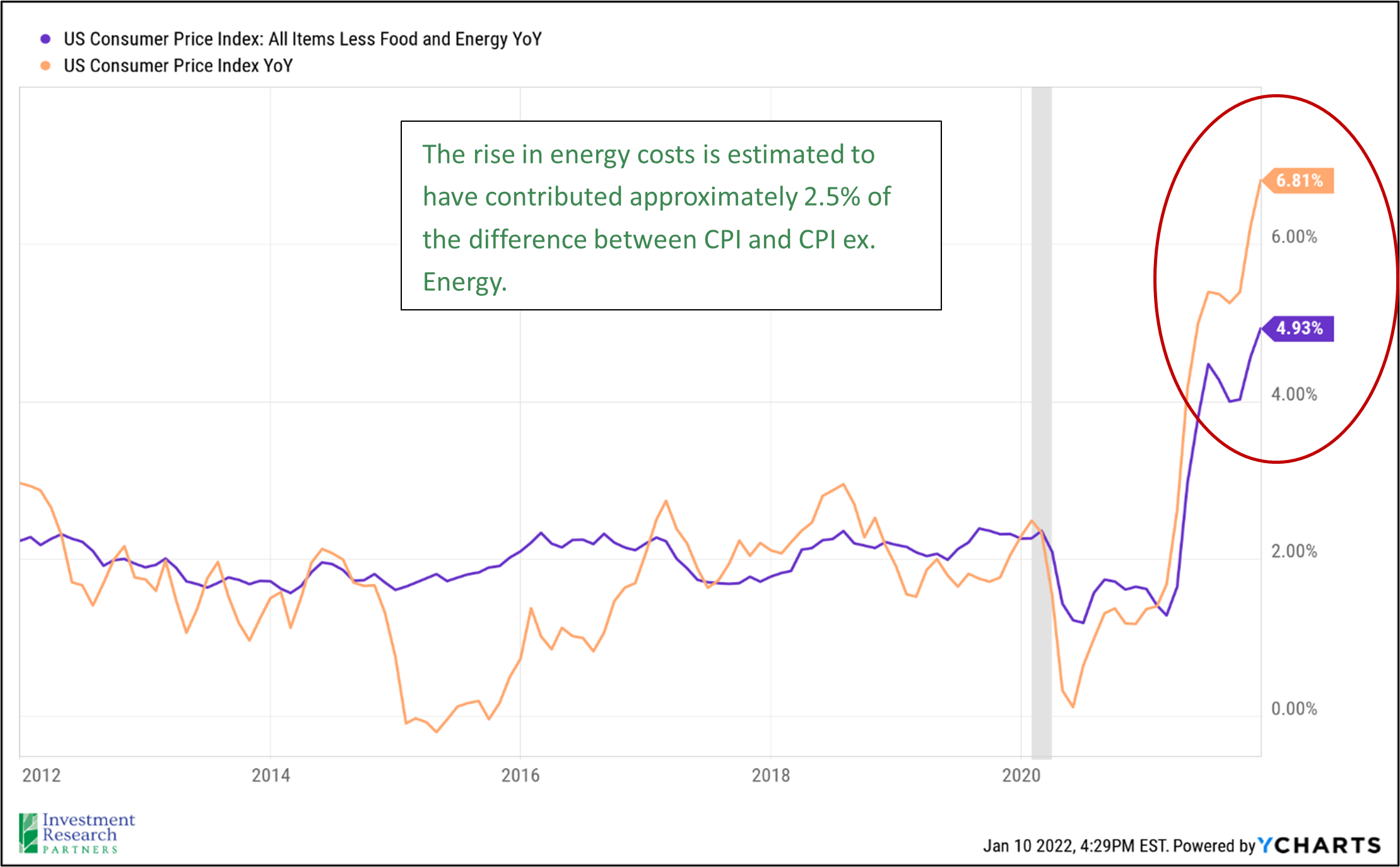 In the early part of the last decade, the US shale oil industry gained prominence. The ability to drill horizontally as opposed to just vertically led to significant advances in oil production capacity as well as increased supply of natural gas as a byproduct of the process. Sensing their share of the energy market being taken by the US shale oil industry, Saudi Arabia announced at the end of 2014 that they would no longer serve to balance the oil market. In other words, they would no longer make sub-optimal economic decisions (less money) for Saudi Arabia for the sake of attempting to provide price stability in energy markets. During the same time and in the subsequent years, renewable energy sources such as wind and solar have become increasingly cost competitive. We expect that the confluence of these three forces will serve cap oil prices around $80/barrel for the foreseeable future (absent the risk of war or other uneconomic force disrupting supply or demand).

Short-term effects from the pandemic are expected to ease in 2022, such as the supply chain bottle necks that have occurred as a result of increased demand (financially healthy households) and diminished supply (production and distribution disruptions due to activity restrictions and more workers becoming ill, particularly in Southeast Asia). Fiscal and monetary stimulus are also expected to be less of a factor in 2022 as direct payments to households and the enhanced monthly childcare tax credit resulting from the CARES Act seem to be a thing of the past. Additionally, the US Federal Reserve has communicated plans to begin increasing its base lending rate and decrease its purchases fixed income securities in 2022. This will likely make borrowing for a business loan or home mortgage more costly in 2022, serving to reduce household and business spending. We have already begun to see evidence that shipping costs are abating as the global supply chain seeks to return to more normal functioning.

Traditional inflation-sensitive assets such as gold, Treasury Inflation Protected Securities (TIPS), and commodities are showing mixed signals regarding the prospects for higher costs based on performance over the last six months (see chart below). Stocks, as measured by the S&P 500, also are not yet showing significant signs of stress that would be expected if the US were entering a runaway inflation environment. 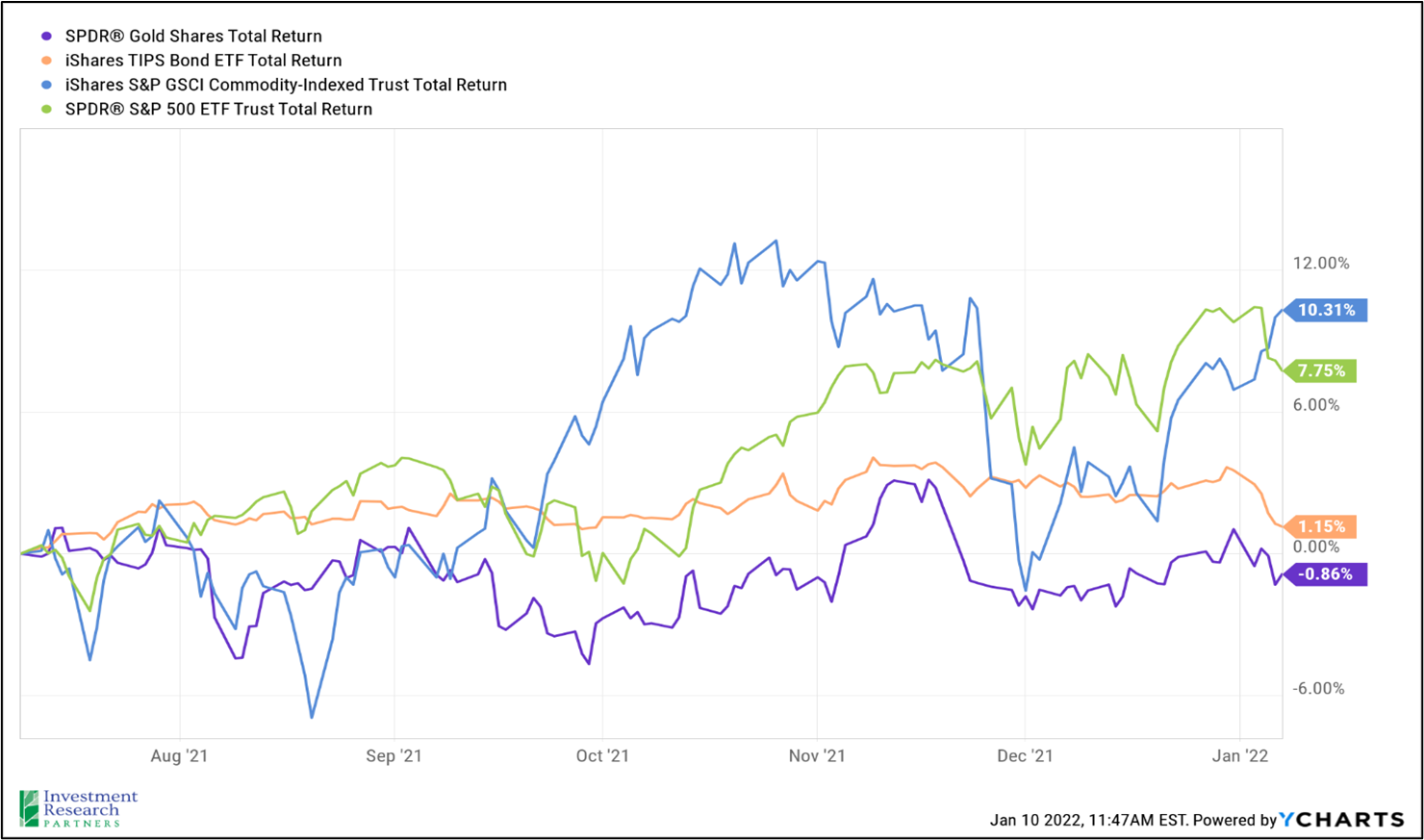 There are also some key differences between the environment today and the hyperinflation environment of the 1970s that is often cited as a risk to markets and the economy. A confluence of three primary forces can be attributed to much of the price rises in the 70s, which were energy shortages, collective bargaining from more prevalent labor unions, and increased government spending.

Today, the US is a much more energy independent nation and no longer anywhere near as reliant on OPEC for oil and related chemicals. Given the significant push toward renewable energy as well as the prevalence of the US shale oil industry, we anticipate that oil prices will not rise and stay above $100/barrel for an extended period of time. Labor unions are much less prevalent today, and while we do anticipate the step-up in labor costs that occurred over the last year to be more or less permanent, we do not expect the same pace of increases to continue given that labor bargaining is more fragmented and businesses are increasingly investing in automation. Government borrowing and spending is significantly elevated, which is one of the few similarities to the 1970s.