What is happening currently?

The situation in Ukraine has deteriorated quickly the past few days. Early in the week, Russia officially recognized areas controlled by separatists (indicated by the Donbas region on the map below) as People’s Republics and immediately moved “peace keeping” forces to the region. The maneuver, which the US and key allies had indicated was imminent for weeks, drew immediate criticism and brought with it what is most likely just the first tranche of sanctions from the US and European allies.[1]

On Wednesday, Russia proceeded with a full-scale invasion of Ukraine, placing the lives of Ukraine’s 44 million people in jeopardy. Russian forces launched artillery and air attacks from multiple fronts, and targets included the capital city of Kyiv, according to reports from the Interior Ministry of Ukraine. President Putin, in a speech to his country, vowed to “demilitarize” Ukraine and all indications point to him seeking to replace Ukrainian leadership with a more pro-Russian regime.[2]

The invasion of Ukraine represents a serious threat to European security and the US, European Union, and NATO members will be meeting throughout the day to discuss their respective responses. At a minimum, we anticipate much more severe economic sanctions from the US and Western allies. However, it is important to remember that Ukraine is not a member of NATO, so it cannot necessarily rely on direct military response from other NATO countries. As we mentioned in our previous Ukraine piece, we believe that the likelihood of this escalating from a regional conflict into a threat to global geopolitical stability hinges on whether the US and Western allies step in with direct military support.

Another unknown is whether the occupation and regime change in Ukraine is President Putin’s ultimate goal. Both Russia and the West have wanted Ukraine to be part of their spheres of influence for years and Putin seemingly has had enough of the back-and-forth. Whether the invasion of Ukraine represents the end of that tug-of-war, or just Putin’s first step in an attempt to resurrect the Soviet Union, is unknown.[3] Regardless of the endgame, as German Chancellor Scholz stated below, this does represent a terrible turn of events for the citizens of Ukraine.

“This is a terrible day for Ukraine and a dark day for Europe,”[4]
German Chancellor Olaf Scholz

What does this mean from an economic and market perspective?

The S&P 500 (a proxy for large-cap US stocks) officially entered correction territory this week, meaning it has dropped more than ten percent from recent highs (see below). Foreign and emerging market stocks have also fallen year-to-date, but not to the same extent (represented by the MSCI EAFE and MSCI Emerging Markets indexes below, respectively).

However, it is important to remember that all three of these indexes were in negative territory at the end of January, before this more recent escalation occurred. Concerns over the jump in inflation, particularly in the US, and the potential for the Federal Reserve to need to act more aggressively than anticipated were the primary drivers of market volatility earlier in the year.

We do anticipate that the invasion of Ukraine will impact markets. As we mentioned in our previous article, the situation was already pressuring energy prices higher, especially in Europe. Russia is the second largest oil exporter in the world and it is also a major exporter of natural gas. The invasion has only added to the energy price jump, as Brent oil prices topped $100 per barrel for the first time since 2014.[5]

Russia is also a major exporter of rare earth minerals, metals such as titanium and palladium. As a result, the conflict could exacerbate industrial supply chain issues that have hampered the global economic rebound from the pandemic.[6]

We do anticipate that risk assets, such as stocks, will be negatively impacted to some degree by the Russian invasion of Ukraine. Rather than simply speculate, we look to history to evaluate how equity markets have reacted to other historical geopolitical events. The graphic below illustrates what has happened to the S&P 500 index on the day of a major geopolitical event, how far it dropped subsequently, and how long it took to fully recover. As you can see, the Pearl Harbor attack and Iraq’s invasion of Kuwait represent the largest drawdowns (19.8% and 16.9%, respectively) and in each case it took more than six months to recover. 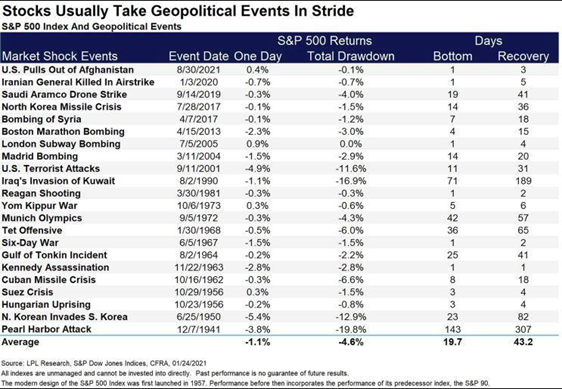 However, it is important to note that many of the geopolitical shocks were essentially non-events from a market perspective. In many instances, the market either did not drop at all or dropped very little. The average daily drop on the day of the geopolitical event was 1.1% and the average total drawdown was less than 5%. That is not to say that this event will not be more significant, but history suggests that we should not necessarily jump to the worst-case conclusion when an event like this occurs.

As a result, we advise that clients exercise patience at this point in time. Stocks, in general, have fallen so far this year, so they are most likely underweight in relation to safe haven assets such as cash and bonds in many portfolios. As counterintuitive as this may sound, this event may actually provide long-term investors with an opportunity to rebalance back into risk assets so long as the conflict does not spill over from a regional conflict into a full-fledged war in Europe. As always, we will provide additional analysis as the situation unfolds, but please feel free to reach out with questions and concerns.